I'm so excited to be heading to Vancouver, Canada, to participate in the annual Powell Street Festival, which celebrates Japanese-Canadian Culture. Obviously, I'm an American and sensitive to the that fact (and I'm now officially once again a Californian at that)! But the experiences of Japanese in North America are of course very similar, and I'll be very interested in meeting with people and talking to them and hearing their stories.

There is a personal note here too--my mother tells me that in the early 20th century, one of our family members left Japan for Vancouver, never to be heard from again (though he supposedly was a doctor). I would so like to find out his story and meet his descendants, though I'm sure such a thing won't be possible on this trip.

I'm going to be reading on Sunday, August 3rd at 1:30 with two lovely writers--Sally Ito and Lydia Kwa. I was invited by the artist Leanne Dunic, and am very much looking forward to meeting her as well. Our reading is from 1:30 to 2:15 PM, in the Firehall Arts Center. My piece will be available as a chapbook--it's titled "Remember Your Roots: Food for Regeneration" and is about foraging, egotistical sushi chefs and mechanics with ninja powers. Hope to see you there!

I've just returned from Japan, thanks to the generosity of the Japan US Friendship Commission and the NEA. While there, I was very flattered to be asked to participate in the documentary series Tomorrow Japan. The series runs on NHK, Japan's national broadcasting system. Tomorrow Japan features journalists and artists who each examine some aspect of the 3/11 disaster, which we now know is the most costly natural disaster to date. Past participants have included Cindy Lauper, Jane Birkin and David Suzuki.

My own personal connection to 3/11 has been documented elsewhere, and you can read about it here and here. I was approached by a producer and asked if perhaps I might like to examine some of the spiritual aspects of Japan and how it is coping with the massive death and destruction. The show will run on NHK International, and also nationally. Here are a few photos that give you some sense of what I was able to do, thanks to NHK and the wonderful producer, Shigero Endo, and his crew. 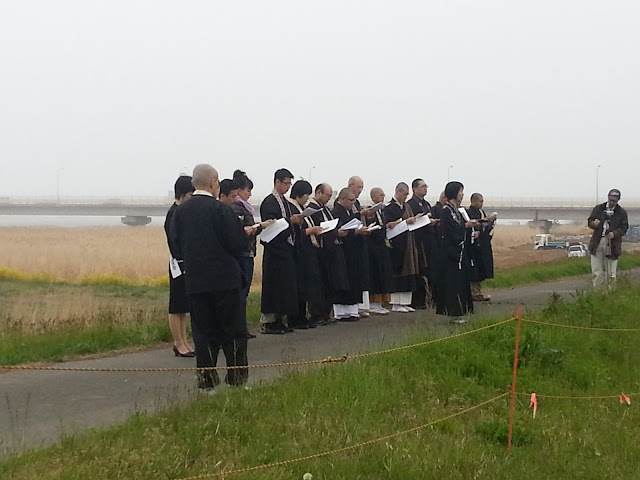 Here, I am with a group of Japanese priests of different sects, participating in sutra reading. Different Buddhist sects (and also non-Buddhist sects) use different prayers to quell the dead. At this spot in Sendai, it's said that numerous people died, and that a great many ghosts have been sighted. Priests travel here to help quell these spirits.

A taxi driver I met later on in my travels told me it can take 30 years for spirits to be settled. 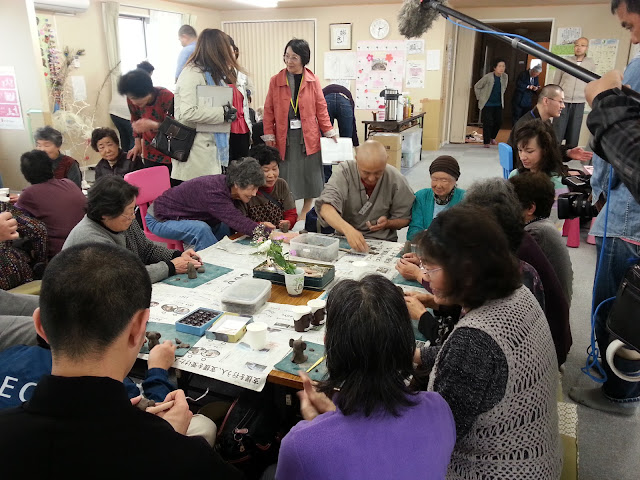 I'm sitting here with a group of tsunami survivors from the town of Ishinomaki, which was badly hit by the tsunami. These people all live in temporary housing. And each person has his or her own story.

The remarkable Buddhist priest Kaneta Taiou (who is a Zen priest--same sect as my family), spends several days each week going from shelter to shelter. He brings coffee and cake and plays Thelonius Monk. A man after my own heart, considering that we are all big jazz fans in my house!

He will listen to people talk, and has a way of getting them to express the very heart of what is troubling them very quickly. He's very tall and people trust his kind but authoritative--and honest--manner implicitly. It's common for women to burst into tears just by seeing his face.

Among the unorthodox techniques he uses to help survivors, is the use of clay to make little Jizo, which are a kind of Buddha. That's what we are all doing in this photo. Some women have lost a family member in the tsunami, and they will write the name of the lost person on the Jizo's back. All the figures will later be blessed, and fired, and returned to their creators.

The temporary housing units are very, very small. So any addition to the home must also be small, in order to fit into the small space. 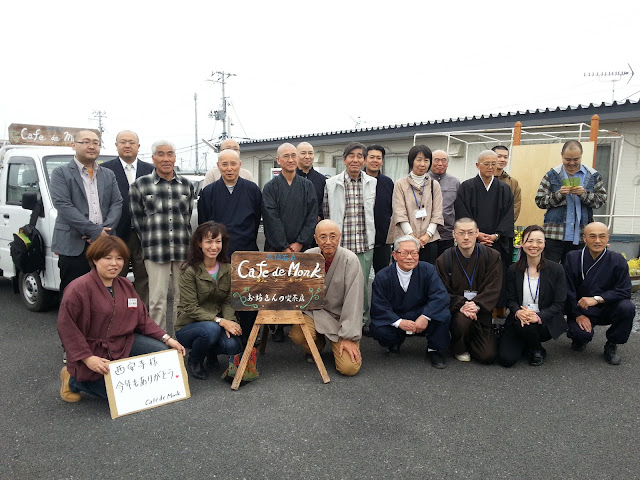 Here I am with Kaneta-san, and his crew. Many of these people are volunteers who, like me, volunteered for the first time. Kaneta-san welcomes all people of faith to help him out--one needn't be Buddhist. His strength and his kindness impressed me greatly.

Thank you so much to everyone at Columbia (my alma mater!) for bringing me in as the visiting writer for this year's Our Word Conference. I'm very excited. I'll be meeting with a group of students, reading some of their work, and talking to them about it. This kind of work is near and dear to my heart as I do, of course, want to see more voices represented in literature. And as a reader, I just want to read more about the world from sensitive voices; travel, after all, is my ultimate high and addiction. Travel is how we meet people from places we have never been to, and make friends with folks we might otherwise never know.

I'm very pleased--and quite humbled--to announce that I am one of five artists selected for the 2013 Japan United States Friendship Comission Award. You can read more here. This grant, funded by the JUSFC and the NEA, will enable me to live in Japan for a period of three months next year. During that time, you can bet I'll be doing as much research and Japan absorption as I possibly can. At my age, I had thought that this kind of adventure would not come to pass. And I'm so thrilled that the Commission has placed its faith in me. You can be I'll be busy, and that I'll work hard. I'll be updating my blog with more details as I learn more. Congrats to the other four finalists!

National Geographic: A Time to Run

Last July, I traveled to Japan for National Geographic. My assignment was to write a "cultural piece" about tsunamis in Japan--the world's most tsunami prone country. There were no firm rules about the piece, and my research and my questions led me to lots of interesting places, and into conversations with many different people.

Ultimately, I ended up writing a more personal piece than I had expected to. You can read "A Time to Run" here, or in the February issue of National Geographic, with the dog on the cover. In this essay, I talk about the childhood journals I kept in Japan. Each night, I'd write an entry under my mother's watchful eye, and do a drawing. It's strange now to see that many of these pictures included waves and the water--but then this is not so strange when you consider that we were often by the beach.

I'm heading for Japan tomorrow, but this will be a personal trip. And quite quick. It's an odd time to go to Japan--the New Year has started and we are still weeks away from any winter festivities and from the first cherry blossoms. But I'm looking forward to some quiet time and some conversations with friends and, of course, relaxing in a nice, big Japanese bath. There are a few things we just don't have in the States--a good onsen is one of them.

Above the Waves, and A Hiatus

I'm overdue in announcing that my memoir, tentatively titled "Above the Waves," has been sold to Alane Mason at Norton. (Norton!). Publishers Marketplace announced the sale thus:

"ABOVE THE WAVES details the history of Marie Mutsuki Mockett's family Buddhist temple in Iwaki, Japan, (25 miles from the Fukushima Daiichi Nuclear Power plant), and explores the religious and cultural frames within which people in Japan cope with death and disaster."

I'm hard at work now. ;-) Alane Mason has edited some of my favorite writers--people I've admired from afar.

I should also say that I've returned from a trip to Japan in July for a really exciting project, that I don't feel ready to announce publicly, but will when the time comes.

Needless to say, with all this work--and with an adorable 20 month old toddler--I don't have the time to update my blog as regularly as I used to and this means I'll be going on hiatus for the time being.

I've enjoyed making friends via the internet, and meeting so many interesting people. Hopefully there will come a time when I can update this blog again.

Thanks for stopping by and for reading.

I'll be celebrating the life and work of English author Penelope Fitzgerald along with event organizer (and friend and fellow writer) Ellis Avery, Jonathan Franzen, Joan Acocella, James Marcus and other writers at the KGB Bar this Sunday at 7. Fitzgerald was extremely influential to me at an important part of my writing life and I'm happy to pay tribute to her life. Hope to see you there.